WESTERN Australia made a clean-sweep of the National Championships at Cannington on Saturday night with Reidy's Runner and Premium Share victorious. 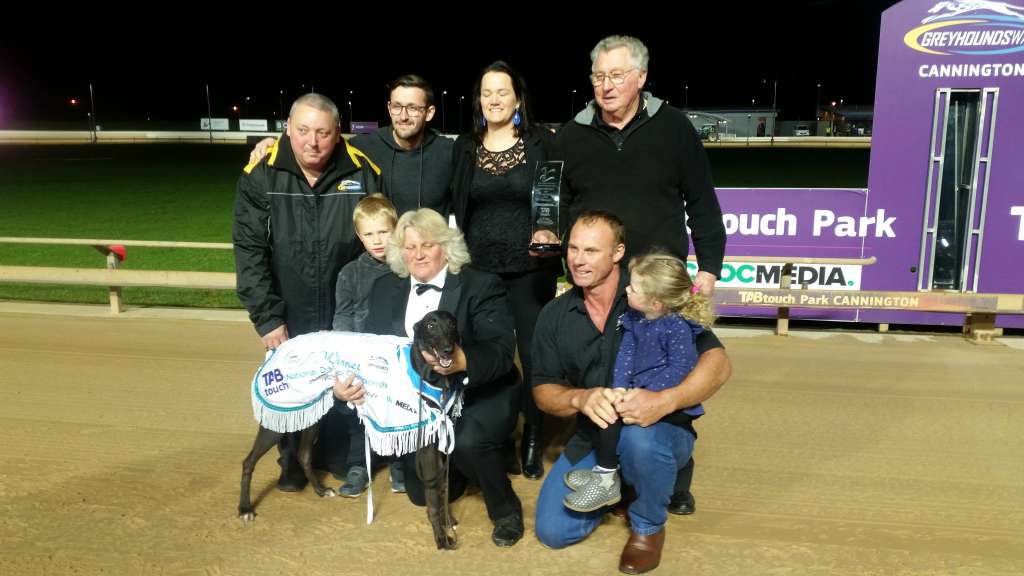 ON Saturday night, just a minor ride share trip from Cannington, at Optus Stadium, the West Coast Eagles fans did it tough as another bird of prey, the Hawks, dented the locals pride and aspirations of a top four finish on the AFL ladder.

While the attendance was not as significant, the euphoria was palpable on National Sprint and Distance Championship night with locals securing both Group 1 deciders.

First up were the stayers and many anticipated Tornado Tears would simply outclass his rivals.

At the Greyhound Clubs’ Australia Hall Of Fame gala dinner the night prior, trainer Robert Britton – while confident his star was in great order – cautioned one and all about the pitfalls of the box (five) the strikingly marked black and white dog needed to contend with.

“He’s going as well as ever, Britton beamed, “but he would once race second or third, find the rails and then get into top gear.

“Now he can get back a little bit and he looks to find an inside run at the first turn.

“That’s the problem this time [from box five].”

And that’s the crux of the result of this $75,000 to-the-winner test of stamina.

Ultimately, local Reidy’s Runner proved to be Tornado Tears’ kryptonite. The Christine Bennett-trained stayer won the WA qualifier on August 8, registering 41.80 and in a similar display (from the 4 alley) he registered win 19 at start 51 and stretched career earnings beyond $213,000.

The early running was taken up by Tasmanian Bronelly Jacob as Reidy’s Runner was in the second half of the field on settling, with Tornado Tears one spot ahead.

Reidy’s Runner, however, dropped onto the rails, sliced to third and then quickly passed NSW hopeful Veloce Nero to be second with just on a lap to run.

The forward thrust was critical to the outcome as Tornado Tears worked into clear air mid-race and then looked to rail underneath Veloce Nero with 200m to travel. Such a manoeuvre is fraught with danger and Veloce Nero refused to yield and momentum was lost.

Ahead, Reidy’s Runner sailed away. Late, Tornado Tears sliced through to snare second ahead of Veloce Nero and the Cannington faithful roared.

Was this Optus Stadium?

Just over 45 minutes later – with the din of the night hardly settling – the Crocmedia National Sprint Final was up for grabs and, when the chips were down, reigning Australian Trainer of the Year Chris Halse’s Premium Share stood tall.

From box five, Premium Share quickly gathered stride to trail NSW star Good Odds Harada at the first turn. Race favourite Black Opium (box four) trailed the pair but she was soon to be dragged down from behind by Campini and the leaders sailed to a virtual match race.

A winner at Wentworth Park a sizzling 29.57, Good Odds Harada had whistled around Cannington in a box-to-box trial in preparation for this contest and those in his corner would have been confident of victory at the halfway mark.

Premium Share, however, is also a genuine talent and, boasting 12 wins from only 22 outings, is a star still on the rise.

At the home turn, Good Odds Harada moved up the track a little and the inside running was there for Premium Share to drive into. He rallied impressively to score by one length in a near-career best 29.59.

Kiwi raider Dyna Dave was the beneficiary of the trouble at the first turn and he sliced through to be third in the middle stages and held that podium position to the wire. Well backed at long odds was the Australia-bred son of Dyna Villa and he flew the New Zealand flag proudly.

As chuffed as the Kiwi punters (who secured fixed odds of $8.50 for the place) might have been, this was all about WA bred stars winning on home ground when all the chips were in.

And the Cannington faithful lapped it up!