THE appearance of Wallbanger in Saturday night’s heats of the Australian Cup at The Meadows has a large group of syndicate owners daring to dream. 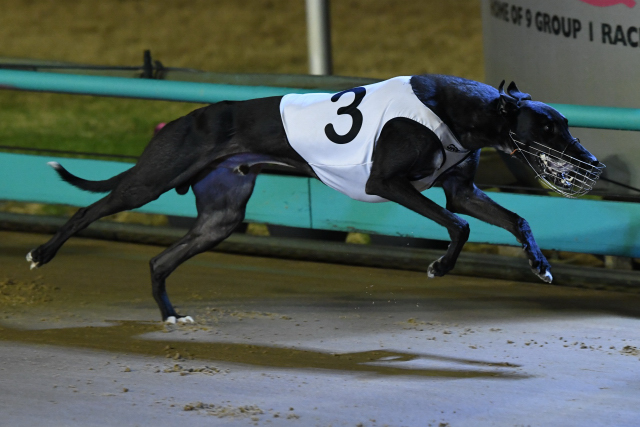 THE appearance of gun sprinter Wallbanger in Saturday night’s heats of the Group 1 TAB Australian Cup at The Meadows has a large group of syndicate owners daring to dream.

Just one win away from a tilt at the Australian Cup’s lucrative $300,000 first prize, the son of Black Magic Opal, trained by Angela Langton, is a graduate of the inaugural National Greyhound Draft conducted by the Sandown Greyhound Racing Club.

“He’s flying the flag for the first draft and the owners behind him in Team Cameron are having a great ride,” said National Draft manager George Farrugia.

“To think he could potentially win over a quarter-of-a-million dollars for his owners in a bit over a week’s time is very exciting for everyone involved in him … they’re having the ride of their life.”

Winner at eight of his 20 career starts, Wallbanger goes around in heat four on Saturday night from box seven, pitted up against a hot field of sprinters, just as you’d expect when you make your way to group 1 company.

Wallbanger’s early success on the track has proven to be a huge boost for the National Draft concept, which, still in its infancy, has been responsible for bringing a whole new group of owners to the sport.

“From the 14 greyhounds to race from the 2018 draft ten have already won races,” Farrugia said.

“Our tenth winner came on Monday at Cannington when Arcadia Star scored and it was after Nine To Seven won a heat of the Group 3 GRV Vic Breeders at The Meadows last week. Precious Hope won at Rockhampton last week as well so we’re covering plenty of territory as well.”

On Wednesday at Richmond, promising pup Rock Solid continued the terrific start to his career with a slick 22.58 400-metre victory for Peter Lagogiane.

“I know Peter is very keen to get him to Wentworth Park, he’s showing a lot of promise,” Farrugia added of the son of My Bro Fabio.

And while the class of the 2018 draft are producing strong results, Farrugia is equally excited about the graduates of the 2019 draft, with some superbly bred greyhounds on the way through.

“The first pup of the 2019 National Greyhound Draft has just finished his education, with the number one draft pick by Barcia Bale and Rhonda Rocks (dam of three-time Group 1 champ Sennachie) showing good ability,” Farrugia added.

“It’s very rewarding when we have people who have never owned a dog before email us to say what a thrill it has been to own their first winner.

“Many have ordered photos for their office or homes and we hope that continues. That’s what it’s all about.”

Limited shares are available from the 2019 draft at www.racewith.com.au