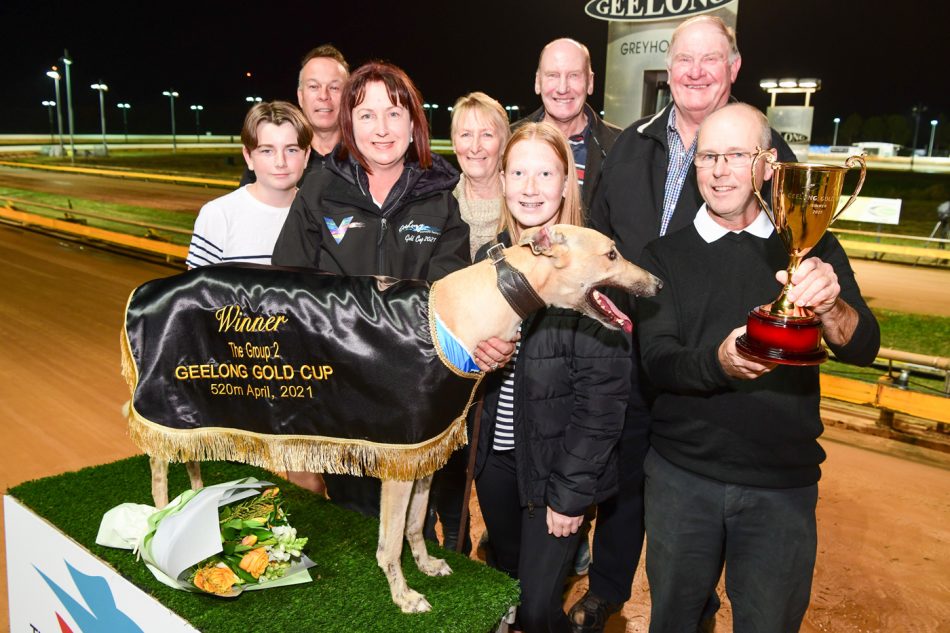 And after a brilliant beginning from box four the Group 2 showpiece was as good as over with the son of Fernando Bale recording a flying 29.54, the time just two one-hundredths outside Fernando Express’ track record.

Finishing four lengths away in second was dual country cups winner Yozo Bale while Sweet As Emm snared third another 1 ¼ lengths away.

Both placegetters were finalists in last year’s Geelong Cup also.

In August last year the hugely talented sprinter finished a fantastic second to Catch The Thief in the Group 2 Warragul St. Leger (460m) before going on to qualify for the Group 3 Cranbourne Classic (520m) won by Taken.

At the start of this year the well bred chaser ran a fast 29.79 at Wentworth Park when winning a heat of the Group 1 National Derby (520m) but a week later was never out of bother in the final won by Zipping Moose.

Friday night’s Geelong Cup heroics was just Weblec Jet’s fourth run back since that National Derby tilt and on the strength of the stunning performance will be a force to be reckoned with in the coming weeks and months.

Meanwhile, on a fantastic card of racing the Cup Night Match Race (520m) was taken out by Utah Express in a very slick 29.63.

Trained by Tim Britton, Utah Express downed Mepunga Warrior which is trained by Tim’s Uncle Jeff Britton, winner of the cup earlier in the night with Weblec Jet.

In a stirring battle down the Geelong straight, Utah Express prevailed by 1 ¼ lengths on the line to pocket the $10,000 first prize.