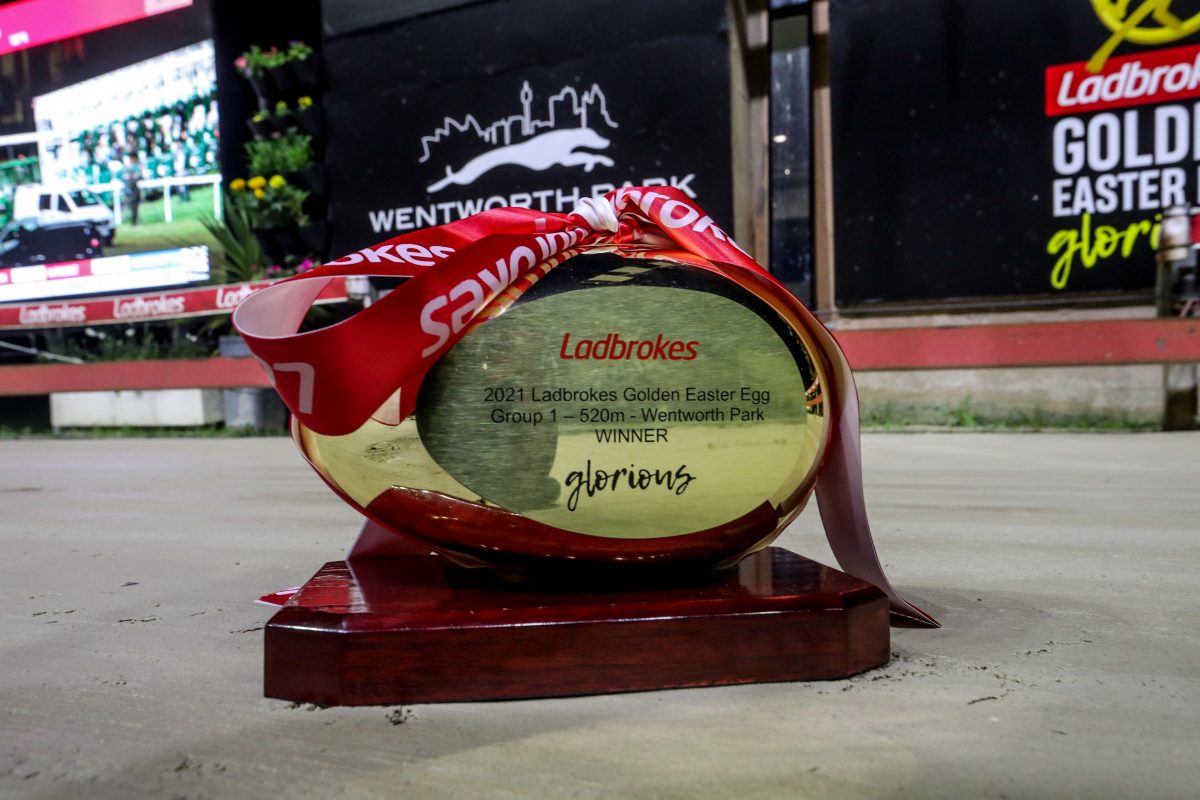 AD: Great start to the night with Victorian PAPI GO FAST making his Sydney debut. Named after Melbourne Storm fullback Ryan Papenhuyzn and be warned he goes just as quick. Mighty hard to beat. Agree with the market that BIT FLASH is the danger while the value runner is MALDINI, he’s been racing in great form.

TN: Similar start to the night Adam. Like his namesake, Papi’s been keeping good company of late in Victoria racing against some elite dogs and lobs in a very winnable race first-up at Wenty. He gets the nod. Agree that BIT FLASH is a big player – loves being drawn wide-out. Best roughie is SPEAKING SPANISH at $20+. Could lead and pinch it.

AD: If he wins it’ll be in the last few strides but at the good odds going with LINE OF QUALITY. He’ll get back and be looking for runs but with an ounce of luck can run the time to win. No surprise to see betting so open, KOTONI BANNER has been impressive in two city wins while FENCE LADY is back in class and has the speed to lead a long way.

TN: Tricky little race this one. Thought KOTONI BANNER mapped to stalk the leaders into the back straight and she’s super-strong late so might just steam right over the top. Both city wins were superb. FENCE LADY is the obvious danger. Raced Tommy Shelby in an Egg heat last week so drops a hundred miles in class. TIRO SUNRISE has raced himself back into form and can figure at odds.

AD: Not sure what you’re thinking here Tim but I’m pretty keen on the former Taswegian PARKOUR. Makes his WPK debut from box one and liked his recent Bulli win. JAX KADE gets into this well as a six-time city winner and has been racing better opposition recently. Expect ARCTIC KINGDOM to be in the thick of things for a long while as well.

TN: Spent an eternity on this race Adam – stack of chances. Seven of the eight runners are leaders and I keep seeing this pink rug (ROSE OF LACHLAN) rushing down the outside and charging to the front. Clocked a near track-record at The Gardens two starts ago. Hard to beat. You’re right, ARCTIC KINGDOM has the early zip to press for the lead as well while PARKOUR has plenty of upside following that Bulli victory.

AD: Tim, you’ll have your work cut out calling this one with speed aplenty. I’m going with NANGAR GOLD which can run a huge race if she finds the front. Thought her last start second was a great pointer. KIPLING is the class runner for trainer Jason Mackay but box seven with so much pace makes the task difficult. Expecting SIZZLE FLY to set a frantic pace early but how he sees out the distance first up is the question.

TN: There will be no place for the faint hearted in the run to the first bend with so much speed drawn inside-to-out Adam. I’ve landed on SARITA who will relish the easier assignment this week, afterall, she ran into Wow in an Egg heat last start. She’s built a good record at Wenty and handles wide draws. CUMBRIA DREAMING is a frustrating dog but can reel off fast times if he gets the start right, but that’s a very big IF. CAPE FERNANDO and NANGAR GOLD round out my top four, any of that quartet could win without surprise.

AD: Tipping we are on the same page here Tim in FERNANDO BLUEY. Couldn’t have been more impressed with his heat victory and if anything I think box five suits him down to the ground. Bet of the night for mine. Expect FAITHY BALE to take another leap forward and run a big race while ZIPPING KYRGIOS and VICKI’S QUEEN have undeniable claims of qualifying as well. As they say there’s no substitute for speed – enter Fernando Bluey.

TN: Yep we are Adam, the ‘world’ seems to have come up with FERNANDO BLUEY and it’s not hard to see why. He’s arguably the best beginner in the country and has a scintillating turn of foot to match. Sensational heat performance where he didn’t give his rivals a look in and expect it to be similar here. Got a lot to carry being both our best bet though! FAITHY BALE gets box-draw favours where she can punch up and follow him early. ZIPPING KYRGIOS, like his namesake, has the X-factor and untapped potential.

AD: No surprises here either with TOMMY SHELBY clearly the one to beat. Either leads or sits on the pace, either way I see him winning for the WA faithful. Couldn’t have been more impressed with ZULU WARLORD last week and he’s the testing material. Would love to see ON THE ROCKS recapture her early Wenty form, if she did would be right in the hunt from box eight.

TN: We read this identical Adam. Tommy could easily explode to the front and put on another galloping exhibition or could even camp on a few of these and reel them in. He’s the complete package and outstanding race dog. Being a wide-runner ZULU WARLORD is perfectly boxed out in the centre of the track. He’s faultless at box-rise. Danger. Thought FIRE ON ICE could fill a minor spot for exotics players.

AD: Okay Tim, opening the shoulders and tipping FIRE LEGEND to defeat WOW. I prefer Wow drawn wide and while there’s every chance he blows them away just think the each-way odds for the ultra-consistent Fire Legend is a better way to go. Reckon the greyhound of the night that is crazy odds is JIM ZARR DASHIAN. Oozes ability, can run fast times and should get a nice run early as well. Definite for exotic players. Tim, you with Wow?

TN: Like you, and many form analysts, we are all looking around WOW due to the inside alley and I’ve come up with EBBY INFRARED at mammoth odds. Was super-gallant when 3rd in his heat chasing Fernando Bluey. Undoubtedly WOW is the one to beat. Superstar and if he gets the ‘green lights’ at the vital stages he’ll win but a risk at the skinny quote. LAKEVIEW WALTER oozes class, and agree that JIM ZARR DASHIAN is a silly price.

AD: Tim the only real question is can he go quicker? FLYING RICCIARDO should make a procession of the final semi with odds suggesting the same. Not much else to really say is there – he’s just on another level. I give RITZA COEN a massive chance of filling the other final spot – well drawn in the red and with the fav high flying along it sets up for him to finish second. I really liked DEVIL SIXTEEN’s second last week – she’s the other place hope for me.

TN: You wouldn’t think he could go any quicker than that Adam, BUT he’s a genuine Rockstar with freakish ability, so, yes, he might well better that time and even give the track-record a shake on a suitable hard and fast surface. He simply wins and an easy way to close out the jackpot quaddie. Thought KURIOS MOTION was a tremendous place bet and probably the way to play the race to get a quid with Ricci being almost unbackable odds. WINLOCK ON TOP and RITZA COEN for the wider multiples.

AD: Bookies are standing STANLEY ROAD for plenty in this series and perhaps they got a glimmer of hope with him drawing box six tonight. I’m still with him though, he’s airborne and is making a habit of finding the front when it matters most. Look for AVA WINE to lead for a long way while Let’s See, who I know you’re a fan of, looks the other main chance. Prepared to risk HERE’S TEARS tonight – just not sure his form is where it was.  Which way are you leaning?

TN: In the corner of LET’S SEE – Loved the way she attacked the line behind the favourite last week. Got shuffled out of it ut was super late. I’ve mapped her parking just behind the leaders and she’ll be hard to hold out. STANLEY ROAD is the best stayer in the land and the one to beat. Tricky draw with speedy wide-runners underneath but he’s overcome trouble in the past. You’re on the mark re: the form of HERE’S TEARS but he seems to grow a leg at Wenty which might be the catalyst for him finding his best.

AD: Expecting a mad rush to the front for this heat and a few just may be found wanting late. FERNANDO CAZZ gets the nod for me. There’s some reservations about the distance but certainly not her class. RUN LIKE JESS ran record sectionals during the Summer Plate here in January and is proven at the distance while the sleeper for me is Victorian BURN TIME which has prepared for this with two solid Angle Park wins. Don’t be surprised if he runs a big race.

TN: Not surprising to see we are basically polar opposites here Adam. Easily the toughest of the Cup heats and I’ve landed on the Northern Rivers trained BURNT ENDS. Absolutely trotted in winning his past 2 starts in Brisbane, and yes, rises sharply in class but is on an upward curve and draws perfectly. TORPEDO TEARS is one of only a few of the runners that doesn’t have to lead to win. Represents each-way value while RUN LIKE JESS makes his own luck bowling along in front – competitive race!

AD: Punters will have their hearts in their mouths the last bit but Tim I reckon the rock solid PRIM AND PROPER can send us home a winner. Has been airborne over the 600s recently and she’s a good thing to lead for mine. BLAZING CARTIER is the group class performer, she can’t be overlooked and the same goes for DOUBLE BLUFF prepared by premier trainer Jason Mackay.

TN: We concur on the closer Adam. I’m bullish about the chances of PRIM AND PROPER. She’s right in the zone at the moment and ready for the step back up to the half mile following dazzling wins over the middle distances. DOUBLE BLUFF has been set for the series and ticking over nicely. Drawn to stalk the speed while the best roughie in the race is DYLAN’S MAGIC. Strips fitter for recent runs.