THE world's greatest greyhound race lived right up to its lofty standing with Whiskey Riot edging out Western Envoy in a thrilling finish. 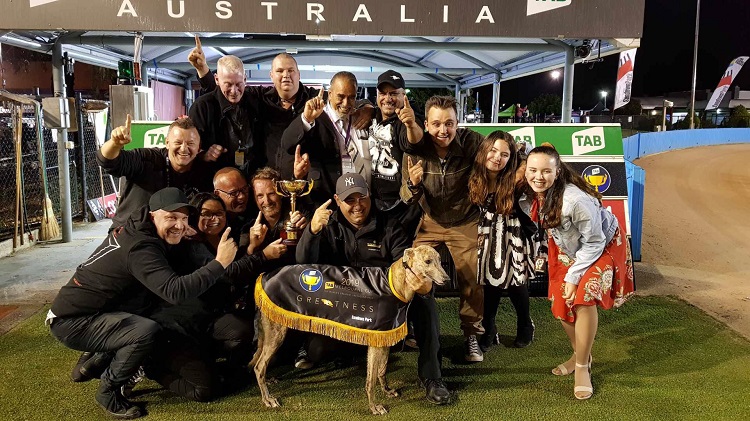 WHISKEY Riot has shed his bridesmaid tag in the best possible fashion with a thrilling victory in the Group 1 TAB Melbourne Cup.

Trained by Anthony Azzopardi, the son of Fernando Bale staved off a brave challenge from Western Envoy down the Sandown straight, capturing his 17th race victory and in doing so pocketing a cool $435,000 for connections.

“Unbelievable, I didn’t know if he won or not, words can’t describe this feeling,” beamed Anthony Azzopardi straight after the race.

“I’ve worked my whole life for a night like this; my father’s not here to see it but this one is for him, I know he’d be watching down from above. And mum’s at home – mum I love you.”

Whiskey Riot went into the Melbourne Cup with the tag as the perennial bridesmaid, with placings in the Group 1 Topgun, Adelaide Cup and Maturity as well as the Group 3 Shootout.

But that was all washed aside at Sandown on Friday night, taking out the world’s most coveted greyhound race by the narrowest of margins in a slick 29.44.

“I want to thank the sponsors TAB for supporting this great event and all the staff at Sandown they do a great job,” Azzopardi beamed, the former NSW trainer now responsible for 11 individual group 1 winners.

“To all my staff a huge thanks … Neil, Jacob, Jim and Shaun – I couldn’t do this without you, it’s a team effort.

“And most importantly a big thanks to the owners, Colin and Sandra Bermingham, we’ve been together for a long time and this makes it all worth it. Thank you.”

Billed as a race for the ages, Friday night’s Group 1 Melbourne Cup delivered in spades.

Western Envoy was enormous finishing second for Angela Langton beaten just half a head, while race favourite Hooked On Scotch lost no admirers in third.

Meanwhile, the race following the Melbourne Cup, the Sir John Dillon Memorial (595m), went the way of Kessler Bale, the son of Dyna Villa producing a powerhouse finish to claim the feature in 34.35.