Why Catch The Thief Is Set For Stud Success

DARREN Puleio knew from the moment the dog's owners called time on the career of sprinter Catch The Thief he needed a piece of this action. 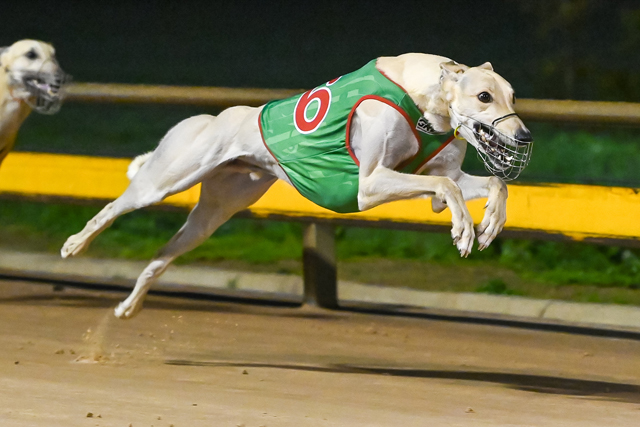 DARREN Puleio knew from the moment the dog’s owners called time on the racing career of sensational sprinter Catch The Thief he needed a piece of the action.

The son of Aussie Infrared and Dundee Ally (by Barcia Bale) was forced into retirement with injury following a decorated career which netted 25 wins from 55 starts, as well as fifteen seconds and three thirds for stakes of $254,000.

It was a career that grabbed the headlines from the moment Catch The Thief hit the racetrack.

So it was with a sense of urgency that Darren accepted an offer from the dog’s owners to stand him at stud, alongside the Puleio home-grown sires Hooked On Scotch ($2200) and his half-brothers Out Of Range ($2000) and Fully Loaded ($990) at Lakeview Sires.

Jason Thompson trains for the Puleio family and took Hooked On Scotch and Out Of Range to Group 1 glory. He put the finishing touches to Catch The Thief’s race career after Matt Clark had launched him to early greatness.

Bred to be a super sprinter, Catch The Thief won the G2 WA Derby, G3 Warragul St Leger, the Listed Winter Cup in WA and the 2020 Match Race series at Angle Park.

He ran super times wherever he went, including 29.21 at Sandown and 29.61 at The Meadows, 29.32 at Cannington and 29.58 at Angle Park. His times at the provincial circuits were equally captivating.

He won on nine different tracks and from every box.

This is the direct damline of legend Osti Lee coming via famed producers Osti’s Shadow and Paris Match. Catch The Thief brings in a saturation of this direct family, found twice in dam Dundee Ally and again in his sire Aussie Infrared.

This can certainly be a route to success for Catch The Thief.

Catch The Thief was a brilliant early paced sprinter which has every reason to look forward to a successful career.

Having Barcia Bale as his damsire makes him an absolute must for matings to Fernando Bale and Allen Deed to recreate so many proven pedigrees, reinforcing the Wheeler family’s famed bloodlines.

Barcia Bale “nicks” superbly with Magic Sprite and Zambora Brockie and also does great with US bloodlines, especially Kinloch Brae and his family and Lonesome Cry.

If we stopped there, and Catch The Thief mated only bitches from those lines, it would be enough to fill his book at stud forever.

In fact, Catch The Thief has retired to the perfect home.

The Puleio family has a number of broodbitches who could be ideal mates for Catch The Thief, especially sisters to Poke The Bear, Out Of Range and Fully Loaded.

Catch The Thief’s second dam Crown Poker is also bred on that proven cross of Token Prince/Just The Best. The Token Prince aspect allows for matings to bitches with Collision and his close relation Cosmic Rumble.

Again, they are everywhere in bloodlines of today.

Daughters of Barcia Bale (damsire of Catch The Thief) has also done well when mated to KC And All and his son Bernardo, as well as that other Aussie sire success SH Avatar.

And, Barcia Bale’s litter sister was mated to KC And All to produce champion Orson Allen.

This makes daughters of KC And All an absolute must for Catch The Thief, and obviously daughters of Bernardo will also suit for this reason.

The Paris Match influence can also take one more reinforcement, and it could come via daughters of My Bro Fabio and My Redeemer who bring in Where’s Pedro in their damline to powerfully link with his brother Hallucinate (in Barcia Bale).

The strength influence of both these sires will be ideal for Catch The Thief.

Whichever way breeders look for the future, a sprint star like Catch The Thief with a superb race career, wonderful family, and bloodlines to favourably link with many broodbitches, makes him a stud dog success.