Why True Collinda Is A Phoenix Fairy Tale

BY her own admission, Steph Tyler was a “blubbering mess” the day she handed Phoenix contender True Collinda over to trainer Jason Thompson. 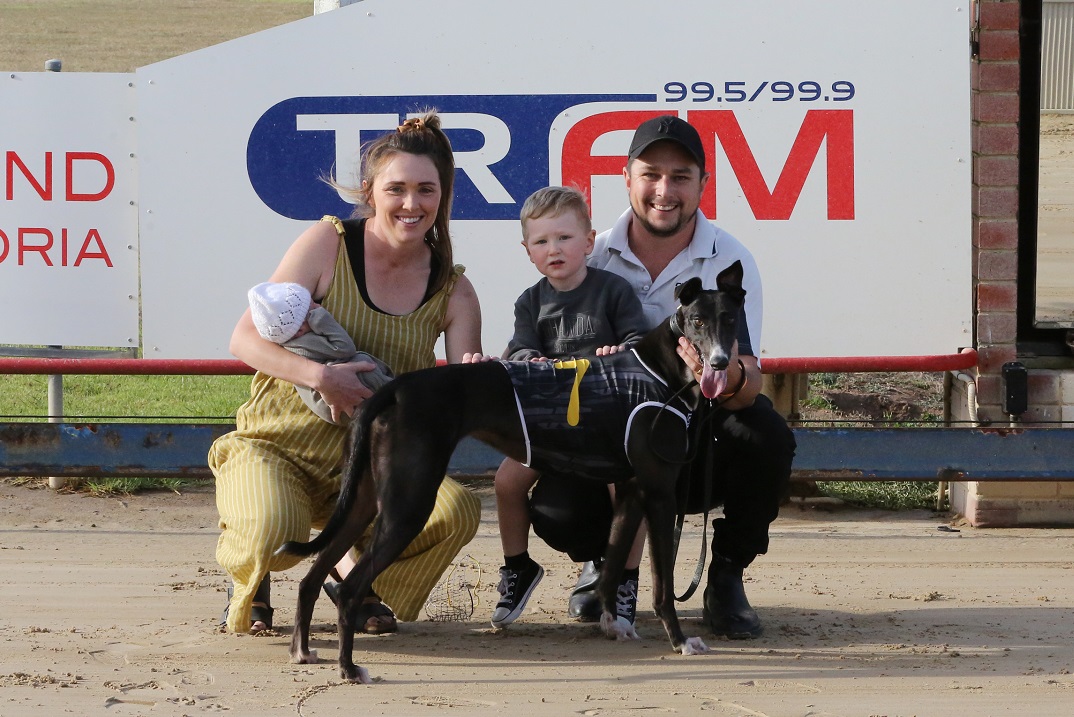 BY her own admission, Steph Tyler was a “blubbering mess” the day she handed proudly homebred TAB Phoenix contender True Collinda over to champion trainer Jason Thompson.

Young mother Steph, husband Sam and children Henry, 3 ½, and Davey, 10 months, could well be shedding tears of a different kind at The Meadows on Saturday night if True Collinda can win the inaugural Phoenix and its massive $750,000 winner’s purse.

“The day I dropped True Collinda at Jason’s place I was sobbing,” said Steph, who hails from the tiny Gippsland town of Boisdale.

“To trust somebody else with your ‘children’ is really difficult.

“That’s what we’ve worked so hard for – so we could train dogs like this – but Sam works full-time, I’m a teacher in between looking after our two little ones and we’ve got 30-odd dogs on our property.

The Jason Thompson trained True Collinda is racing in the TAB's slot in the #TABPhoenix and will come out of box 7.

“Family comes first and we also had to do what’s best for the dogs.

“It was a hard call but it was definitely the right call.”

The build-up to the Phoenix was especially nerve-wracking for Steph after Thompson elected to trial True Collinda and Typhoon Sammy ‘head to head’ to select which of the duo would fill TAB’s berth in the world’s only greyhound slot race.

True Collinda won the trial in impressive style but unfortunately for Steph, she was only left with Boxes 6 and 7 to choose between at Sunday’s innovative box draw, where connections selected their alleys.

After she picked the latter, True Collinda is a $10 chance with TAB.

“It’s an incredibly exciting week for us,” Steph said.

“We’re a young family so the money would be life-changing. It would be amazing. But for us it’s more about the achievement of having a dog that’s good enough to race in such a big event. It’s the first Phoenix too!

“The nerves have calmed down a bit since we knew ‘Polly’ was in the race. There’s no expectations, no pressure and what will be, will be.

“We’re thrilled and humbled just to be a part of it and we couldn’t be more grateful to Jason, to TAB and everyone associated with making this race happen.

“How would I feel if she won? Oh my God, I think I’d have a heart attack!”

The Collinda line – the name derives from Steph’s aunty Colleen and mum Linda – goes back to the late ’70s through Steph’s dad Laurence Cameron and her uncle Don Cameron.

But after the line fell on lean times, the Tylers have rejuvenated, if not resurrected it, in stunning fashion from just a handful of litters.

True Collinda’s sensational Zambora Brockie x She’s A Collinda litter, which also includes Collinda Patty, winner of the G3 Speed Star (600m) at The Meadows and Sandown Park’s 595m track record holder, is only the third litter the Tylers have bred after bravely taking the plunge.

“Dad is thrilled that we’ve got the line back after it went amiss and the dogs weren’t much chop for five generations,” Steph offered.

“We do everything – we breed, whelp, rear, break, pre-train and train and we both work too!”