WOW has drawn box five but remains a hot favourite to score his second successive Gosford Cup win in Tuesday night's $40,000 to the winner final. 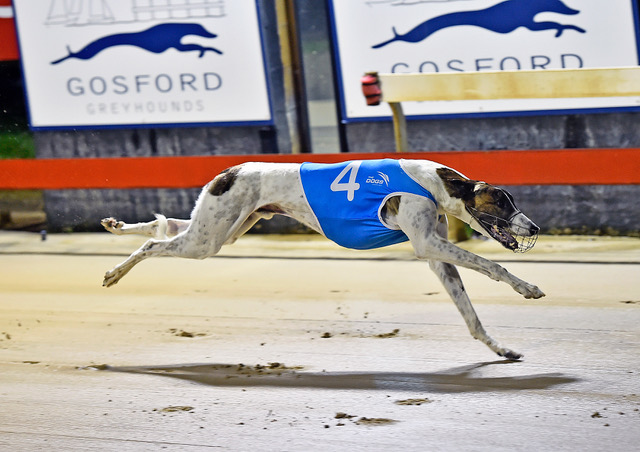 His chances of notching back-to-back Cup wins soared when arch-rival Zipping Kyrgios, which won his heat from box two in 29.16, came up with a “horror” box eight draw in the final.

Minnie Finn, whose husband John trains Zipping Kyrgios, commented: “It will be hard for our dog from out there because it is especially tough to win from box eight at Gosford.

“Zipping Kyrgios can’t seem to draw a decent box in big races because he also drew eight when he chased home Good Odds Cash in the NSW Sprint Championship at Dapto in August.”

Ruth Matic, whose daughter Danielle trains Wow, was hoping for box one in the Cup final but is satisfied with box five, commenting: “Wow had box five in The Temlee, the Topgun and the Paws Of Thunder and drew four when he won his second Goulburn Cup in 2021 so is accustomed to jumping from middle boxes.”

Wow is on for back-to-back Beast Unleashed @GossyGreys Cups after smashing Heat 4, clocking the fastest time of 29.14, with Fire Legend in second place.

“Aston Shine is a bit quicker than Lots Of Chatter, has more early pace and is ideally drawn so he is my better chance,” Jose said.

“Aston Shine was at $3 when he finished seventh in a Gosford Cup heat in 2020 but it was wet that night and he usually hates the rain.

“When it started raining before last Tuesday’s heats I thought to myself, oh no not again, but this time he handled it well.”

Aston Shine and Zipping Kyrgios are respectively owned by two of the world’s most successful owner-breeders, SA-based Ray Borda and Marty Hallinan, from Clergate, near Orange.

Ironically Graeme Jose registered the biggest win in nearly 30 years as a trainer when he took out the 2008 National Distance Championship with the Marty Hallinan owned Mantra Lad, but prepares Aston Shine for Borda.

Graeme Jose has a second dog into the Beast Unleashed @GossyGreys Cup!

Victorian raider Lots Of Chatter has won Heat 2, with You Know Tree behind him – in the exact same time as Heat 1 – 29.37.

Hallinan raced the 2019 Golden Easter Egg winner Zipping Bailey and her dam Zipping Willow, the “queen of Wentworth Park” but insists Zipping Kyrgios is “up there with that pair.”

Hallinan said: “It is hard to compare them because they are different types.

“Zipping Bailey is the only greyhound to come from last to win a Golden Easter Egg while most of Zipping Willow’s 34 wins from 53 starts were at Wentworth Park, where she reeled off 10 consecutive wins at one stage.

“But Zipping Kyrgios is such a terrific chaser he is definitely in their league.”

“Because of that good draw Fire Legend has gone from being no hope to some hope,” trainer Mark Moroney said.

“He is not as quick as Wow and Zipping Kyrgios but because he is such a professional race dog Fire Legend always seems to find a way of putting himself in the picture.”

Best outsider is the Jason Mackay-trained Impress Shades, who had box two when he chased home Aston Shine in his heat.

“Impress Shades had to draw wide to be any chance because in his heat he moved up the track and found trouble,” Mackay said.

“But while Impress Shades is suitably drawn Wow will be awfully hard to beat.”

“The Gosford Cup wasn’t always good for mum though because two years after she won with Addis Boy she had terrible luck with Buddy Rich, another very good dog she trained,” Kerry Drynan said.

“Buddy Rich jumped in front in the 2006 final but after being way out in front and seeming to have the race won he broke down and Cool Mat went on to win.

“Vamos Penny has box four this year and while that is better than being drawn out wide, I will be satisfied if she can be a placegetter against such a terrific field.

“I was rapt in Vamos Penny’s second placing behind Zipping Kyrgios because she drew poorly in box six and missed the jump, something my bitch does not normally do.

“She is usually a good beginner and Gosford is one of her favourite tracks so she is in with a chance.”

Graeme Jose, who qualified with Aston Shine and Lots Of Chatter, is the only trainer with two Gosford Cup finalists, a far cry from his modest beginning in the sport.

“I paid just $250 for my first dog, Opal Man, but when he finished second in the 1994 Healesville Cup and gave me my first city winner a year later at Melbourne’s old Olympic Park track, I have been involved in the sport ever since” Jose said.