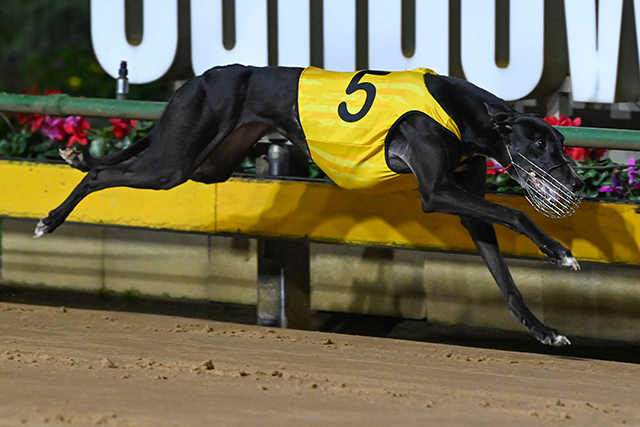 Fresh off last Thursday’s group 1 Sapphire Crown – a win that made her the 10th greyhound in history to win more than $1m in prize money – Wow She’s Fast has been installed the $1.20 favourite to defeat Black Opal Rocks in their match and is rated a $1.65 to run the fastest time overall.

Her 28.817 winning time in the Sapphire Crown was the second fastest time ever recorded at Sandown Park, consolidating her standing as the series number 1 seed.

The last two Speed Star winners (Aston Rupee and Hooked On Scotch) also held top billing ahead of their victories.

The Group 3 Bill Collins #SpeedStar returns this Thursday night at @sandowndogs and The Watchdog has previewed all four match races.

Big Opal Rocks – the second seed with a 29.02 qualifying time – has drawn the inside (box 1) and needs to take full advantage to lead and hold that position if he is to claim the $10,000 on offer for the match win.

Leaders have 72.5% of previous match races over 515m (excluding consolation and support events), however he will need to improve on his 5.15 best split if he is to hold off the sport’s latest millionaire.

McInerny (1) meets Rapaki Rocks (3) in the night’s opening match with the pair posting identical 29.24 qualifying times, however what they have done on the track since recording those times couldn’t be more different.

McInerny registered his time on 5 May but hasn’t been placed in his two runs since.

Rapaki Rocks returned from a middle distance campaign to record his time in a heat of the Harrison-Dawson on 13 May before claiming the group 1 final a week later. While McInerny should appreciate the inside draw – the first time he’s drawn in the inside half of a field in five starts – and is quicker early than Rapaki Rocks, the latter has been racing in irrepressible form and will be hard to hold off.

👀 MUST WATCH FROM SATURDAY

Group 3 finalist DUSTY BOURBSKI (8) won for the seventh time from 16 starts in a best-of-meeting 29.986 seconds at @MelbourneGreys (525m) for trainer Andrea Dailly.

Dusty Bourbski (1) and Security Man (3) clash in the second match race and both should relish the two dog format. Security Man qualified just 0.006 seconds faster than Dusty Bourbski, with both greyhounds posting impressive victories mixed with the occasional head scratcher.

Dusty Bourbski has the stronger race record, however this format is all about speed and with Security Man the likely leader, he looks the better value in the match.

Aston Tango (1) and Levitation (3) meet in the third clash of the night with the two dashing bitches entering the race in career best form. Aston Tango has been faultless in her last two wins – both leading all of the way at Sandown Park with 5.05 first splits and 29.12 and 29.13 overall times.

She flew out and won in an incredible 29.12, smashing her previous best of 29.54! pic.twitter.com/pqeVpZ9Ff6

Levitation meanwhile was the fastest qualifier for the group 1 Sapphire Crown, winning her heat in 29.07 (kennelmate Wow She’s Fast won in 29.19 three races earlier on the same card) and clocking a 5.07 first split.

This shapes as the most even of the four matches with the leader at the first turn the likely winner. For that reason, Aston Tango looks the better value.

The 2022 Bill Collins Speed Star will be run under an amended format to previous editions with each match being run as its own race (rather than the ‘race within a race’ format that has caused confusion in the past).

Each match race will carry $10,000 to the winner (with $2000 to the runner up), while the fastest time overall will be crowned the Speed Star winner with connections collecting a further $15,000.

A range of betting options, including fastest first split and inside vs outside boxes will also be available.