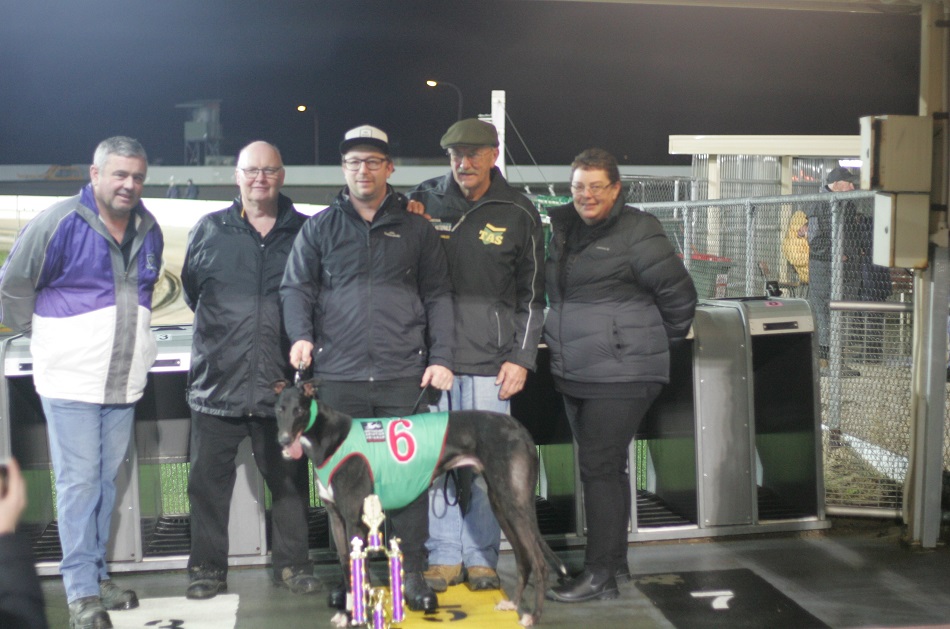 Englund won his first Hobart Breeders with Wynburn Witness in 2015 and the following year with Wynburn Alpha.

Having his third career start on the Hobart track, Wynburn Marshall had set time honours for all three semi-final’s last week clocking 26.30 seconds and would start the red hot favourite from box six in the final as the one to beat.

The highly-talented son of Fabregas and Wynburn Toozie ran up to his standing in the market, taking the lead coming off the back and running away to score a 3-1/2 length win over Coober Can with Kootenay in third.

“Marshall is certainly a nice pup in the making with a big future ahead of him,” the trainer proudly declared.

“Full credit goes to my dad Tom (Englund) who does a tremendous job in rearing all the pups we race. We’re pretty much spoiled for choice in the stock we have and trained and what’s coming through the kennels at the moment.”

“The costs and expenses involved with having pups is huge and these races are a massive benefit to help encourage people to breed, not only the incentives but all the young pups need these events for experience,” Ben commented.

The Englund family have plenty to look forward to in regards to the current band of brood bitches to breed on with.

“Wynburn Arrow (x Magic Sprite) has been implanted to sire Superior Panama so we are really excited about that, we still have Wynburn Toozie, Cutie, Lethal and Dancer to breed with down the track so that’s really exciting,” Ben said.

Wynburn Marshall will now be targeted towards his juvenile races before embarking on another feature race agenda.

It was also an interstate double on Thursday for the Wynburn Racing Syndicate with star chaser Wynburn Sheean breaking through for victory at Albion Park in Queensland under the guidance of champion trainer Tony Brett.

The son of Aston Dee Bee held out Modern Talking to score a narrow win, running 29.95 seconds over 520-metres.

Connections were delighted in Wynburn Sheean’s efforts in continuing his path towards the Group 1 Brisbane Cup.