EXCITING prospect Tesla arrived just in time to claim a thrilling edition of the Group 1 Silver Chief at The Meadows on Saturday night. 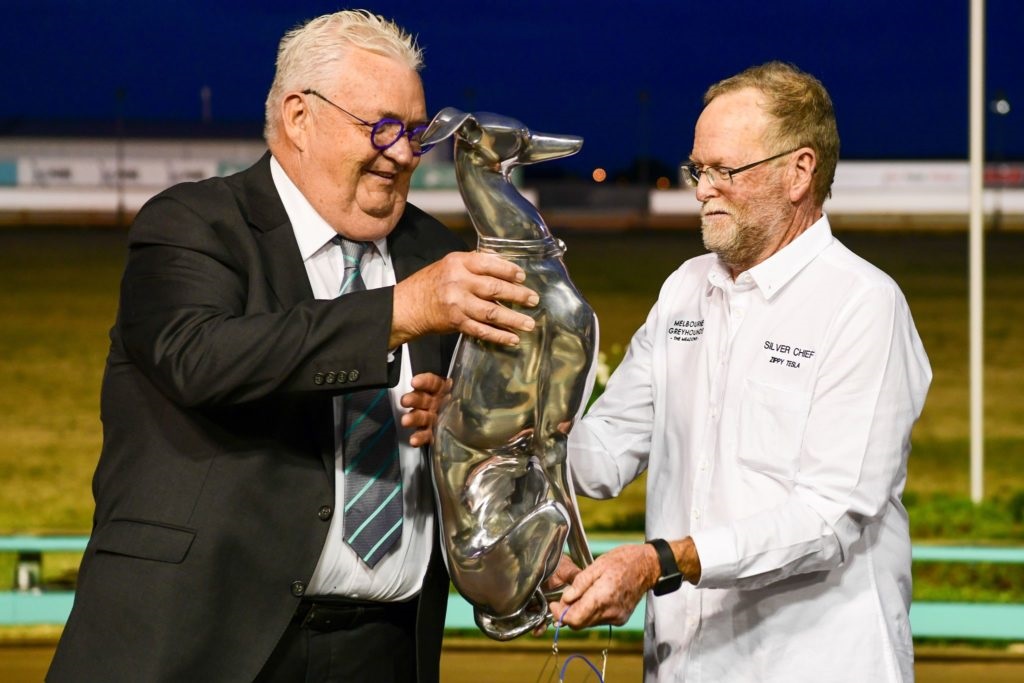 ZIPPY Tesla arrived just in time to claim a thrilling edition of the group 1 Silver Chief at The Meadows on Saturday night.

The Andrea Dailly-trained son of gun US sire KC And All began cleanly from box three but was soon shuffled back to sixth with a lap to go after the well supported It’s Only Money shifted out from box one.

Compliance made full use of the space afforded to him from box eight, crossing the field to lead clearly through the first turn and with Titan Blazer (7) emerging from the pack, the pair established a three length margin over the field down the back straight.

Zippy Tesla began to improve his position, his patience rewarded as he worked between runners and once in clear air, unleashed a devastating finishing burst, powering between the two leaders upon turning for home to nab Compliance in the final stride.

Group 1 #SilverChief Final: ZIPPY TESLA (B3) found himself a mile off the pace but he used all his strength to reel in the front-running COMPLIANCE (B8) to claim the $100,000 first prize in 29.79sec.#GreyhoundRacing @TheMeadowsDogs pic.twitter.com/Dc7Ui7pxTs

Concerns over his early speed saw Zippy Tesla drift from an opening quote of $2.60 to start the $5.50 second favourite behind Xavien Bale for the $100,000 to the winner classic.

However despite a pedestrian opening split of 5.23, Zippy Tesla’s winning time of 29.79 was just 0.02 seconds off his heat time – the fastest of the eight finalists – in which he enjoyed a clear run from box one indicating a career over more ground beckons.

The win was the Dailly’s second Silver Chief success following Ollie Bale’s victory in 2014. While the Dailly kennels is synonymous with the Wheeler breeding empire, Zippy Tesla is a product of their own breeding program.

First run in 1964, the Silver Chief honour roll is littered with some of the sport’s greatest champions both on track and in the stud ranks, including Simon Told Helen, Awesome Assassin, Kantarn Bale and Light Of Fire.