DAVID Brasch takes us through all that's going on in the world of breeding, including the news that Zoom Out has been served by Barcia Bale. 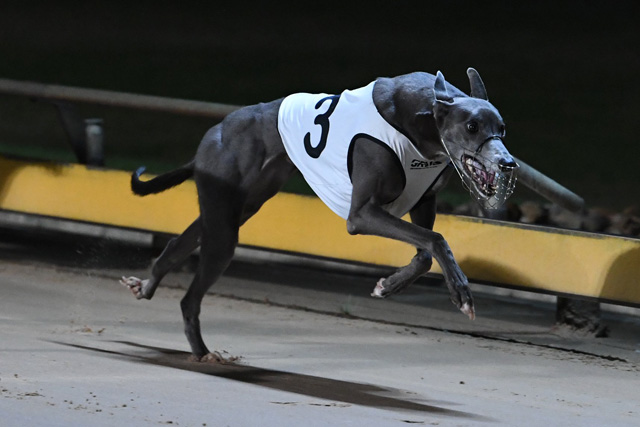 THAT great Victorian race bitch Zoom Out has been mated to champion sire Barcia Bale and there is a proven recipe for the litter to be a huge success.

Zoom Out (Banjo Boy-Unquestionably by Dyna Tron) was a fabulous race bitch for the Michelle Mallia-Magri kennel starting 61 times for 29 wins and 19 placings. She earned $140,000 in stakes.

She was a special race bitch winning the Ballarat Oaks and Healesville Oaks, but was second in the Laurels, Warrnambool Cup, Healesville Cup and a finalist in the Shepparton Cup.

Zoom Out came from a litter of five named offspring and all were prolific winners.

Her mating to Barcia Bale is a natural.

That’s because it will virtually recreate the pedigree of current young star Shima Shine who recently smashed the Ballarat track record.

Putting Zoom Out to Barcia Bale will duplicate the famous broodbitch Gold Rush Bale and this is the very same cross found 3×3 in the pedigree of Shima Shine.

Gold Rush Bale will come into the pedigree 3×4 but still very powerfully positioned to impact upon the resultant offspring.

Outside Pass Heads To Fernando Bale

OUTSIDE Pass was a tragedy beaten in the Group 1 Melbourne Cup won by Ando’s Mac, looming up to win in the back straight, only to have her winning chances ruined by interference.

She won the Ipswich Gold Cup but was second in the G1 Winter Cup, G2 Shootout, G3 Speed Star and third in the G1 Brisbane Cup. She was a finalist in the Nat Sprint, Melbourne Cup, Winter Cup, National Distance, Richmond Oaks, Maitland Cup and ran fast times over all distances.

Outside Pass has already produced a litter by Barcia Bale that are just starting to be educated in Queensland by the bitch’s former trainer Tony Apap and are showing ability.

Now Outside Pass has been mated to Fernando Bale for her second litter.

This mating will bring in a 3×2 cross of Rosemary Bale and Head Bound who are bred on a reverse cross of New Tears and Head Honcho. They provide a superb balance for each other in this mating.

Also, putting a bitch with Late Late Show in her pedigree to Fernando Bale is also taking advantage of the fact that Late Late Show brings in a cross of Dalcash Deal a litter sister to Borrismore Gold who is found in the damline of Kelsos Fusileer (sire of Fernando Bale).

A VERY interesting mating for Outside Pass.

Three Of The Best For Jenner

MICK Jenner and his mate Jack Murray are proudly boasting the recent arrival of three healthy pups from the very smart race bitch Kilkee May.

By Kinloch Brae-Sweet Melon, Kilkee May produced two dogs and one bitch to her mating to Flying Fired Up. None of the trio will be for sale.

Kilkee May started 59 times for 14 wins and 18 placings, earning $33,000. She won the Orange Cup, was third in the Bathurst Cup, a luckless finalist in the Richmond Oaks and a Wenty winner.

The mating to Flying Fired Up is interesting. He was a high class race dog in the US and his first crop to race are showing great ability.
Of great interest in this mating is the 5×4 cross of Greys Jasmine and her sister Greys Julianna.

Over in WA. recent Cannington winner First Rule (Kinloch Brae-Luzaka Icon) is also bred on a cross of Greys Julianna and her brother Greys Statesman coming in 3×5.

First Rule has won eight and been placed in five of her 21 starts. Seven of the nine in this litter have won.

It augurs well for the Flying Fired Up-Kilkee May trio of pups.

Cosmic Bonus Keeps On Keeping On

THE victory of veteran galloper Cosmic Bonus at Casino last Friday was indicative of that grand race dog’s soundness and will to win.

Cosmic Bonus is on target for a second tilt at The Masters final at Wenty on $1 Million Chase final night. He won the race in 2018.

But, there is also talk the son of Cosmic Rumble-Dark And Stormy by Bit Chili soon will retire for a stud career.

Cosmic Bonus first started racing in October 2016. He has started odds on in 31 of his starts and more than $5 in only 13.

There are numerous options available for Cosmic Bonus at stud, especially for daughters of Fernando Bale. Cosmic Bonus’ dam was mated to Fernando to produce Fernando Bonus a potential superstar whose career was tragically ended via a broken hock.

VICTORIAN breeder Jay Ferguson is not frightened to put his money where his mouth is.

Jay has a litter of nine pups by Slingshot Whippa from his Ground producing broodbitch Paw Sa Prize.

Yes, it is home-grown bloodlines, but there is much method behind Jay’s mating of his pair.

Slingshot Whippa (Fernando Bale-Little Hammer) started only 19 times for seven wins and seven placings. Jay knew the dog was a potential star only to see him break a hock in a semi-final of the inaugural running of the $1 Million Chase in 2018.

Whippa’s litter brother Slingshot Hammer has done the family proud as winner of the G3 Cranbourne Classic. He has been a multiple Group finalist and placegetter being in three Group 1 finals.

Paw Sa Prize (Fabregas-Natural Sapphire) is from the famous direct damline that has tossed up legend Miata. AND, to a mating to Fernando Bale, she is the dam of Slingshot Gypsy (2nd G1 Nat Futurity, G2 WA Oaks, 3rd G2 Sandown Laurels).

He also plans to mate Paw Sa Prize to Aston Dee Bee for her next mating, and is planning on a Slingshot Whippa-Oriental Rush mating down the track.

SOME interesting recent winners with pedigrees to study include the littermates Raging Ralston and Stanley Gordon.

By My Bro Fabio-Broadway Miss, they were both finalists in the recent Young Star Classic at Hobart.

Raging Ralston won 10 of his first 11 starts in Tassie.

The interesting aspect is that their pedigree shows a 2×2 cross of the full relations Flamenco (dam of Fabio) and Mogambo (sire of Broadway Miss).

Flamenco and Mogambo are Where’s Pedro-Zarbo.

Breeders can take advantage of this column by sending mating and whelping advice to: david@pedigreesbydesign.com